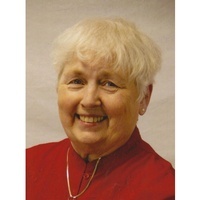 Who can find a virtuous woman? for her price is far above rubies. 11 The heart of her husband doth safely trust in her, so that he shall have no need of spoil. 12 She will do him good and not evil all the days of her life.
Proverbs 31:10-12

Ruth and Ron Reeves joined HBF in the first year in Harrisonville. They served faithfully until their passing. Ruth's family was part of the baby church plant in Kansas City in the 1950's named Kansas City Baptist Temple pastored by Wendell Zimmerman. Ruth attended Bible Baptist College in Springfield where she met Ron Reeves who had completed his military service in the United States Navy, trusted Christ as Savior and chose to go to Bible Baptist College to study for ministry. They were the loves of one another's lives and mighty ministers in Cass County.  They helped three church plants and supported other ministries in their time here.

They are part of the rich heritage of Heartland Baptist Fellowship that goes back to our roots at Kansas City Baptist Temple and the movement of Bible Believing Baptist churches going back to the turn of the previous century who eventually formed the World Bible Fellowship and Bible Baptist Fellowship. Both Ruth and Ron graduated from Baptist Bible College in Springfield and settled in Harrisonville to raise their family.

The obituary below can be found at Atkinson Funeral Home.

Ruth Ellen Reeves, 79, Harrisonville, Missouri died Thursday, November 29, 2018 at her home in Harrisonville.  A Celebration of Life service will be held at 7:30 p.m. Monday, December 3, 2018 at the Heartland Baptist Fellowship in Harrisonville with visitation from 6:00- 7:30 p.m.  The family suggests contributions to the Missouri Baptist Children’s Home.

Ruth was the secretary for the Cass County Missouri Commissioner’s Office for 20 years before her retirement in 2006.  She was a member of the Heartland Baptist Fellowship.  Ruth had formerly served as the secretary at Pleasant Ridge Baptist Church in Harrisonville.  Ruth had served as a Cub Scout Den Mother for Pack 3, and had also been a member of the Harrisonville Band Boosters.